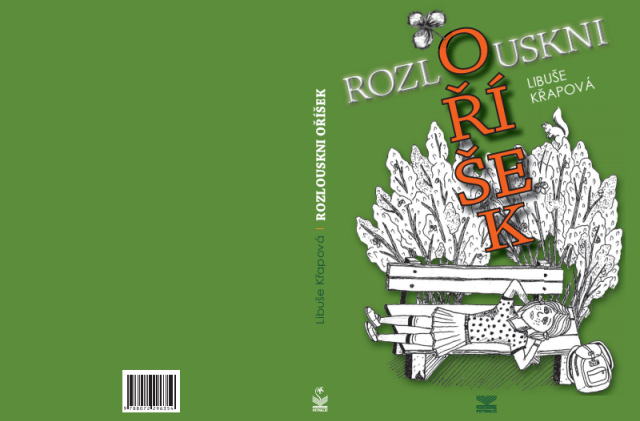 “I am writing, still writing a fairy-tale”

Well, yes, I do. As a child I liked listening to them, reading, even inventing them, later I used to narrate them to my children. To write them I started as a “late” adult person. At that time I had some troubles and I was looking for a way how to cope with them not to be overwhelmed by. Suddenly, it came to my mind that long time ago the writing had helped to the writer Mrs. Karolina Světlá to recover from problems and stresses, so why couldn’t I try it too?

So I did. My first works got lost when my computer had broken down. After that I learned it is necessary to back up during writing, and I wrote some other fairy-tales. First I was writing so called “into the drawer” but later I was tempted to publish so I started it at different webs, mostly at i60.cz. I was surprised and pleased a lot how my tales were accepted, liked and pleasing.

Even one company dealing with “Individual books for children” became interested in. I got an offer so I wrote for them two stories. Again they liked them and my self-confidence increased.

In 2016 Mr. Radek helped me to set up a blog named “Matylda’s Chattering” – “Matyldino povídání” and I began publishing my fairy-tales and stories there. In the section “Fairy-Tales”- “Pohádky” there is a podcast “Fairy-Tales to your Wish” – “Pohádky na přání”. To one who fulfilled specific conditions I wrote the fairy-tale according to his/her specification. I am sorry but nowadays I don’t write this sort of tales because I don’t have time for it. But I never tell never and I would like to write these tales again.

I am short of time because I started writing books for children. The first one was issued in the publishing company Petrklíč. Its name is “Crack the Nut” – “Rozlouskni oříšek” and it was illustrated by Mr. Václav Nezval. The story is about the girl Majda. She is nine years old and lives with her younger sister and their grandparents. In summer the family had a car crash, the parents are still in hospital; Majda is red-haired and after the car-crash she is still limping. At school which she started to attend children are sneering to her and they do not want to become friends with her. Of course the end is good Majda is clever and is able to cope with it.

Publishing of the second book called “Hanka run away or Troubles of one Teenage Girl” – “Hanko, utíkej! aneb Trampoty jedné puberťačky” was planned to the autumn last year. Hanka from the story will be soon thirteen and she depends a lot on the meaning of other girls. She doesn’t want them to call her “pauper”. So she is unhappy because she won’t go in summer with her parents to the seaside for holidays but to some “awkward” pond. But something will happen there. This story is for girls and has a detective plot. This story is said to be even more interesting than the “Nuts” “Oříšky” according to who I put the text to test it. Publishing was stopped by pandemics of Covid-19. Same way as it was with the first book I started to look for sponsors also with “Hanka”. This is a very common way when publishing books of unknown, starting authors and I took it into account. Unfortunately sponsors are nowadays having other problems and I understand it. For the time being I have put off this publishing to the year 2022. Anyway I am going to need some sponsors. Don’t you now any?

This year I have had a lot of novelties.

At You Tube I have the channel “Author’s Reading”. There aren’t many fairy-tales yet, but soon their number will increase.

This year in March the book “Crack the Nut” – “Rozlouskni oříšek” will be published in the publishing house of Mr. Martin Koláček “E-books are the Must” – “E-knihy jedou”. I believe that readers will accept it even in this form.

Other negotiations are in progress – just a try for the time being – to publish fairy-tale books classically on paper. I would like to issue my fairy-tales by stages as a serial called “Kind Fairy-Tales” – “Laskavé pohádky”. This name I have chosen because I hear from many different people that my fairy-tales are kind hearted. I must admit that this is what I tried to do consciously. These are still fairy-tales and they are for children. Fairy-tales must have the happy end.

All the pictures are drawn by the professional illustrator Ms Johanka.

I have still more plans. For example to write an adventure book for boys. Can you imagine that as a child you would ever meet a live dinosaur? Only a small one so none of you would be frightened. And you could be friends.

And many more others…

I still have a lot of work and ideas.

All my fairy-tales and stories are in Czech only.